On November 12th Charles Manson, charismatic leader of the “Manson Family,” turned 75. Manson has been a resident of the California Department of Prisons since being convicted of Conspiracy to Commit Murder in 1971.

It seems that Manson still has quite a following despite his years of incarceration. The CNN video shows a 21 year old Manson follower who sounds just like the girls he brainwashed back in the Manson Family/Spahn Ranch days.

After watching the CNN clip and giving his newest webpage a look, I was amazed that his current rants seem to be about the environment, but after viewing the 1976 “Manson Follower” video below, I realized he had been saying this all along. Just not saying it in a very
coherent fashion.

How to Shrink a Human Head

Step 1  Make an incision on the back of the neck and proceeded to remove all the skin and flesh from the cranium taking care to not damage the facial features.

Step 2  Place  seeds underneath the eyelids and sew them shut

The Largest Mass Execution in US History 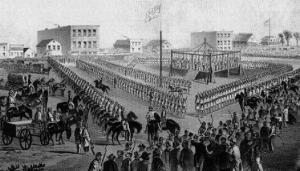 On December 6, 1862, President Lincoln notified Brigadier-General Henry H. Sibley that he should “cause to be executed” thirty-nine  Dakota warriors.

The condemned, were participants in what has come to be know as the Sioux Uprising or the Dakota Conflict. The conflict erupted when the US Government failed to meet its obligations under treaties with Dakota tribes. The treaties guaranteed the tribes money and food in exchange for millions of acres of their territory.

The US Government did not pay the tribes directly. Treaty money was dispensed to “Indian Agents” who, in turn, were to hand out food to the tribes. The Indian Agents kept much of the treaty money and much of the food was sold to white settlers. The food that did eventually make its way to tribes was often spoiled.

The tribes were forced to go off reservation to acquire food.

During August and September of 1862 there were countless raids on warehouses, military posts and private homes.  The US Military rounded up hundreds of Dakota peoples and held them at Mankato, MN.
END_OF_DOCUMENT_TOKEN_TO_BE_REPLACED